How to record the screen of a Aligator RX460

Recording the screen of your mobile/cell phone Aligator RX460 in a video with sound can be very useful to perform a tutorial or show an acquaintance how to perform certain tasks in a Aligator RX460, save in a video file and then send it or upload it to a platform like YouTube or social networks.

Sometimes we would like to record on video with sound a story that we have seen on Instagram of an acquaintance, a phone call or video call with a family member to keep it as a souvenir or to use it as evidence or a TikTok video.

To make this recording in your Aligator RX460 follow these steps:

If, on the contrary, what you want is to take a screenshot of your Aligator RX460 in a still image instead of video, click on the following link and follow the indicated steps Capture screen on Aligator RX460

1- First step:
Simultaneously press the volume up and power buttons on your Aligator RX460 for about two seconds until a recording start message appears.

2- Second step:
Select the quality of the HD or mini video. The microphone sound of your Aligator RX460 will be recorded by default (this is useful for example to explain the operation of an app to an acquaintance or to record a message while recording the video on the screen of Aligator RX460) so If you don't want the video to have external sounds, you should record it in a noise-free environment. 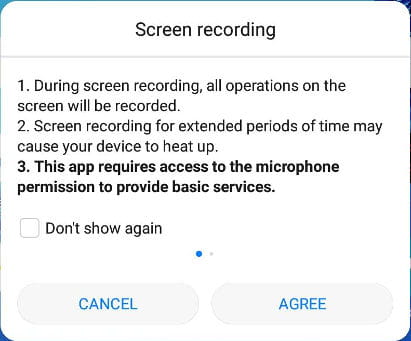 3- Third step:
To stop recording, press the volume up and power buttons simultaneously on your 0r click on "Stop" at the top left of the screen.