How to take screenshot or screen capture in a Galaxy J4+

An essential functionality today in a mobile phone or tablet is the possibility of taking screenshots, that is to say to grab in an image what appears on the screen at that precise moment on your Samsung Galaxy J4+.

There are applications that can perform this functionality, but fortunately you do not need to install any additional app as it is included in the Android 8.1 (Oreo) operating system.

If you want to make a screenshot to your Samsung Galaxy J4+ you have to follow these simple steps:

First we go to the screen to which you want to make the screenshot of your Samsung Galaxy J4+, be it a web page, chat or application.

There are two methods: using the Android native method by simultaneously pressing the power key and the volume key down or through Samsung's own system: it consists of sliding the side of the palm of the hand across the screen from the right side to the left (or vice versa) of our Galaxy J4+ to that we see a flash that indicates that the capture has been made. This method may not be available, depending on the version of the software you have.
To take the screenshot with this gesture you must first activate it from the settings, go to the settings, click on "Advanced functions" and activate the option "Move palm to capture". 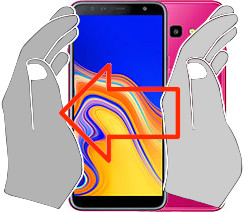 Open the image gallery, the images and photos will appear sorted by date,, click on the capture that you just made on your Galaxy J4+, and you will be able to edit it, trim it or send it to your contacts or through your preferred social network.

Second method to make a screenshot in Galaxy J4+:

2- Open the notification bar or quick setting bar of your Samsung Galaxy J4+ by sliding your finger from the top of the screen down and pressing the "Screenshot" icon.

How to capture a full page in Samsung Galaxy J4+?

If what you want is to capture a complete web page in your Samsung Galaxy J4+ first of all you should know that this method is not available natively on Android for the moment however Samsung has incorporated it into its One UI customization layer.

Once the capture is made, it will be saved in the Galaxy J4+ image gallery and you can edit and share it on social networks.

If none of the indicated methods to capture screen on your Samsung Galaxy J4+ has worked, it may be a problem with the settings or software, to solve it we must reset the Galaxy J4+ settings.

A notice will be displayed indicating that all settings except personal data, security, languages, accounts and downloaded applications will be reset (ie this data will not be deleted). Click on “Reset settings” to continue, enter your PIN or unlock pattern and click on “Reset” again, the Galaxy J4+ will restart and you can check if the screenshot works correctly.

The Samsung Galaxy J4+ comes from the factory with the Android 8.1 (Oreo) operating system.