How to make a screenshot or capture in a iPhone 6s

An essential functionality today in a mobile phone or tablet is the possibility of taking screenshots, that is to say to record in an image what appears on the screen at that precise moment on your Apple iPhone 6s.

There are applications that can perform this functionality, but fortunately you do not need to install any additional app as it is included in the iOS 9| upgradable to iOS 10.3.2 operating system.

If you want to make a screenshot to your Apple iPhone 6s you have to follow these simple steps:

1- First step: First we go to the screen to which you want to make the screenshot of your Apple iPhone 6s, be it a web page, chat or application.

2- Second step: Simultaneously press the power or unlock key (on the right side) and the central button or Touch ID of your iPhone 6s and quickly release both buttons at the same time.

3- Third step: The captured image will be minimized and will appear in the lower part of the screen on the left of the iPhone 6s for a few seconds, if you want to edit or share the capture immediately click on the thumbnail before it disappears. If you don't want to use the screenshot at this time, ignore the thumbnail and you can continue using the device and continue taking more screenshots..

Second method to make a screenshot in iPhone 6s:

How to capture a full page in Apple iPhone 6s??

If what you want is to capture a complete web page in your iPhone 6s, first of all you should know that this method only works with Apple's Safari browser, so you should open that page to which you want to carry out the complete capture with scroll with the Safari browser. 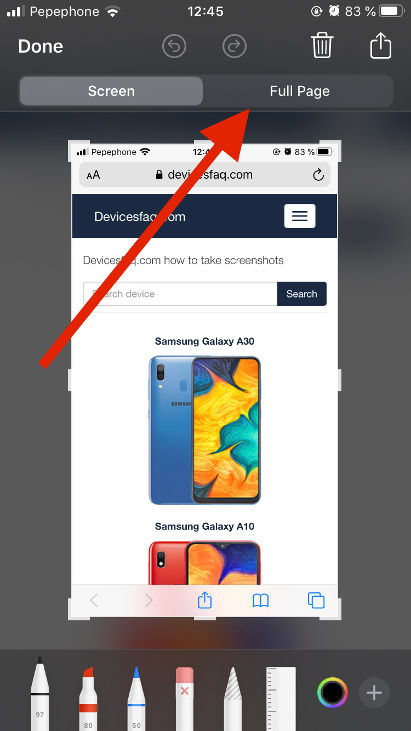 The Apple iPhone 6s it comes from the factory with the operating system iOS 9| upgradable to iOS 10.3.2